Our Domaine is a family business, rooted in the village of Fontenay-pres-Chablis. As far back as 1810 Pierre ROY, our ancestor, was a vigneron in Fontenay, followed in turn by his son of the same name, then the second Pierre was followed by one of his sons, Appolinaire. After him came Fernand ROY (1903) the founder of our domaine, and it was he who started what we continue today.

In 1936 Fernand and Clotilde ROY bought the farm which is today our point of welcome, of our work and our winemaking. Raymond (1928) their son, took over the reins until the nineties, assisted by his son Claude. Then Claude took over in his turn and was joined by David and Karine, the next generation.

We farm 20 hectares, exclusively found on the right bank of the Serein, and which allows us to make 4 different Chablis appellations – Petit Chablis, Chablis, Chablis 1er crus ‘Le Fourchaume’ and ‘Le Vaulorent’, and the Chablis Grand Crus ‘Les Bourgros’ and ‘Les Preuses’. 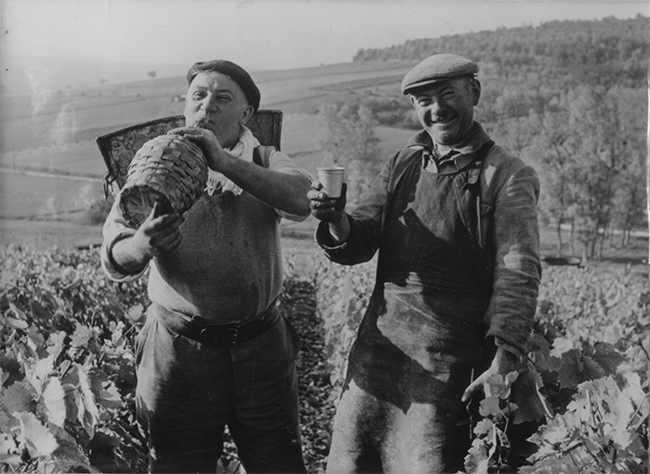 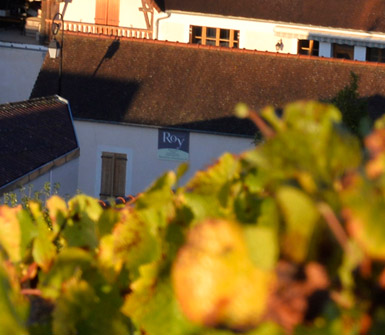 The wines of Chablis have been known and travelled throughout Europe since the Middle Ages. The entire vineyard was destroyed by phylloxera in the 19th century. After dozens of years of work, the vines flourished again.

In particular since the 1960’s the vineyards, thanks to advances in frost protection, have definitively re-launched themselves on the road to international renown.

The region of Chablis, the most northern of Burgundy, experiences harsh winters, late springs, and frequent springtime frosts. Summers are hot and dry.

The wines of Chablis are made from about 6 800 hectares, all planted to Chardonnay. The terroir is defined by the Institut National des Appellations d’Origine (I.N.A.O).

The 4 Chablis appellations achieve their typicity due to the kimmeridgian soils of limestone-clay, and their sunny emplacements, at their best for the Grand Crus. In the soil one can find miniscule oyster fossils (ostrea virgule), which shows the presence of an ancient sea. The geology of the Chablis region can be dated back to the Jurassic period; in particular the Kimmeridgian (146-141 million years ago), and the Portlandian (141-135 million years ago). The sea at this time was deep and warm and very rich in carbonates. As time went by this sea dried up.

The INAO has defined 4 Appellations d’Origine Contrôlée (AOC) for the region: Le "Petit Chablis" (about 1 500 ha), generally to be found on the plateau, and limited to a maximum yield of 60 hl/ha. Le "Chablis" (about 4 400ha) on slopes facing North and East, and on the plateau. The yields are also limited to 60 hl/ha. Les "Chablis Premier Cru" (about 750 ha) on slopes facing South and West. They are spread over 79 different ‘lieu-dits’ (parcels), grouped into 40 different climats (vineyards): the most well known are: Mont-de-Milieu, Montée-de-Tonnerre, Fourchaume, Vaillons, Montmains, Vaucoupins, Côte de Léchet, Beauroy, Les Fourneaux… ; the yield is limited to 58 hl/ha. Les "Chablis Grand Cru" (about 100ha) are harvested exclusively from the communes of Chablis and Fyé on the slopes of the right bank of the Serein, facing Chablis. This appellation is divided into 7 vineyards: Blanchot, Bougros, les Clos, Grenouilles, Preuses, Valmur and Vaudésirs. The yield is limited to 54 hl/ha.

Chablis has a pale yellow colour with green highlights when young.

The originality and typicity of Chablis are its mineral taste, iodized that comes from terroir. Fontenay-pres-Chablis is a small town located at the north-east of Chablis, on the right bank of the Serein. Its vineyards cover 175 hectares and producing Chablis Premiers Crus 'Fourchaume', 'Côte de Fontenay', Chablis and Petit Chablis.

Our land of about 18 hectares is spread over the entire area, but uniquely on the right bank of the Serein. Our parcels are situated over a radius of about 5km around Fontenay près Chablis.

Our petit chablis comes from only one parcel of 1 hectare 60, situated in the lieu-dit ‘Petite Preuse’ on a plateau. This vineyard was planted in 1986. The yield is limited to 60 hl/ha.

Our chablis come from several parcels, and totals about 9 hectares, from the communes of Fontenay and Maligny. All of the parcels were planted in the 70’s. The yield is limited to 60 hl/ha.

Our 1er Cru Fourchaume comes from several parcels from the ‘Cote de Fontenay’, ‘Couverte’, and ‘Vaupulent’, totalling about 2 hectares; these were planted between 1968 and 1985. They are to be found on steep slopes, along the roads between Chablis and Fontenay. These slopes face each other in the Fontenay valley. The yield is limited to 58hl/ha.

Our 1er Cru Vaulorent is a small parcel of about 1 hectare planted in 1968. It is situated on a South-West facing slope, just next to the Grand Cru Preuses. The Vaulorent by its location and its rarity is an exceptional 1er cru. The yield is limited to 58hl/ha.

Our Chablis Grand Cru Bougros of 3 hectares 60 ares was planted by our forebears Fernand ROY and Raymond ROY in 1963. It is on a South-West facing slope. Despite its age (60 years) this parcel has excellent yields. The yields are limited to 54 hl/ha.

Chablis Grand Cru Preuses is a parcel of about 50 ares, replanted in 2002. It is on a South-West facing slope. The yields are limited to 54 hl/ha. 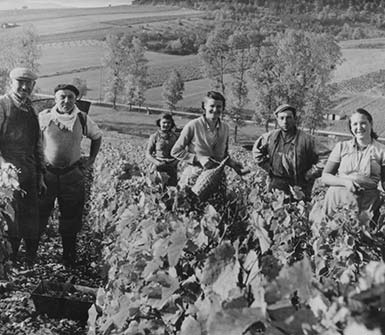 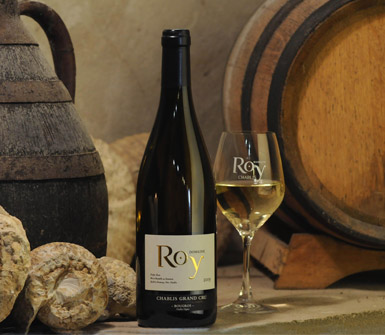 Our philosophy is respect for our terroir, history and origins.

We wait until the grapes are fully ripe before harvesting them. The harvest is done by machine, except for the Grand Crus. The grapes are pressed with a pneumatic press. The vinification is carried out uniquely in thermo-regulated stainless steel tanks, in order to preserve the aromas and natural characters, and the freshness of the wine, which are the defining characteristics of Chablis. The bottles are closed using only natural cork.

We are directly involved at all stages of the wine-making process, from working in the vines to selling the bottles.

Our Chablis and Petit Chablis are sold through the cellar-door once they are bottled, the Premier Crus after about 2 years. As for the Grand Crus Bourgros and Preuses, which need more time to age, they are sold as older vintages.